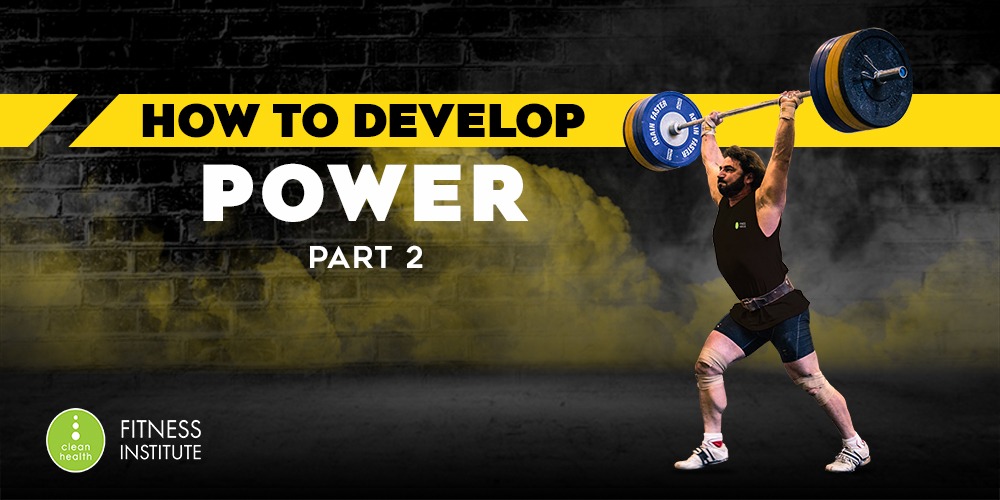 How to Develop Power- Part 2

In part 1 of this blog we discussed various concept in relation developing maximal power. Recall, that in order to maximize power you need to have an integrated plan that addresses both the force and velocity components of the power equation.

Now, that doesn’t necessarily mean you have to work on both at the same time or that both need to be given equal attention. Where you spend most of your time will largely depend on the needs of the athlete.

For young athletes just starting out you should focus mostly on increasing maximal strength, in order to increase their force generating capacity. Equally important, young athletes need to focus more on increasing the strength and stiffness of their tendons. Stiffer tendons stretch and recoil more quickly under high loads, so there is quicker transfer of force from muscle to bone. This results in more free energy, reduced ground contact time, and improved running speed and economy. Both these factors are best developed with the use of heavy loads.

However, it is important not to start out too heavy when working with young athletes as we need to allow ample time for the connective tissues to adapt to the heavier loading. A linear periodization model would work best here as it allows for a gradual increase and progression in training loads.

Here is an example of a 12-week macro-cycle for a beginner athlete.

Beginner athletes need a high frequency of practice so they would be best off training the entire body 3 times per week. One exercise for each of the major muscle groups performed for 3-4 sets is sufficient volume to elicit optimal adaptations in beginners.

Here is an example of a 12-week macro-cycle for an intermediate athlete.

For intermediate athletes, the mesocycle length will typically be shorter because they adapt to the training stimulus faster. Intermediate athletes will also need a higher number of sets per muscle group because their work capacity is greater. They can also tolerate higher intensities because their nervous system is more efficient, and their connective tissue can withstand the heavier loading.

In terms of training frequency, studies have shown that moderately trained lifters actually need more recovery between sessions targeting the same muscle group than beginners (1). This is likely due to the higher intensities used by moderately trained lifters, which would require more recovery. Intermediate lifters would generally do best using an upper/lower split and performing 3-4 sessions per week in total.

Advanced athletes can use a similar model to intermediate athletes but incorporating advanced training methods such as supramaximal eccentrics, loaded drop jumps, accommodating resistance, and contrast training. Advanced athletes will also need to vary the time they spend on training for maximal strength verses training for power based on their explosive strength deficit. For example, if an athletes maximal power snatch is less than 65% of their maximum squat, they need to focus more on power and rate of force development. On the other hand, if their power snatch is more than 65% of their squat, they should focus more on maximal strength.

While strength can become a limiting factor in increasing power development, heavy resistance training could decrease power output over time unless accompanied by explosive movements (2). Therefore, it is important that these two variables are balanced appropriately when integrated into an athletes long term training plan.

Want to learn more about strength development, periodization and effective & simple methods that get strength and performance results? Enrol into the Strength System International Certification Bundle by the Australian Strength Coach, Sebastian Oreb!