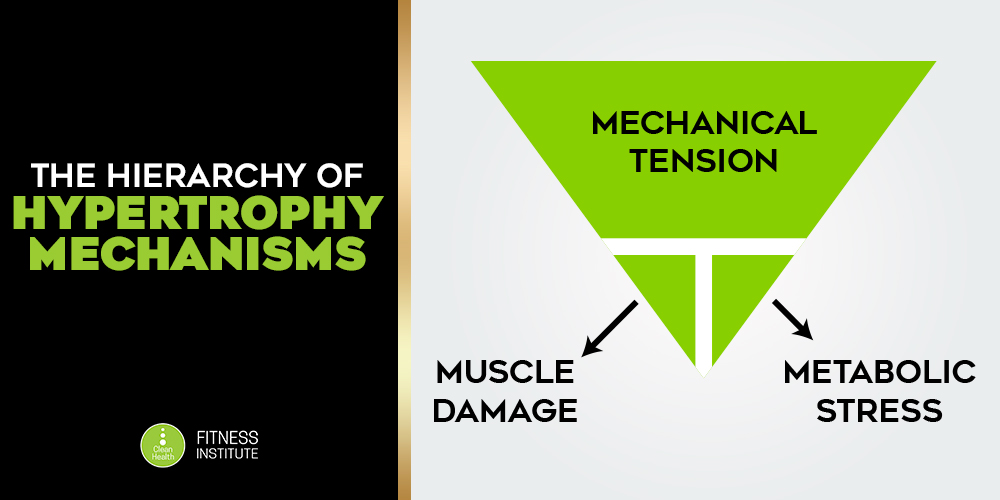 In 2010, Brad Schoenfeld published a study titled ‘The Mechanisms of Muscle Hypertrophy and Their Application to Resistance Training’, which has since become one of the most cited studies on the topic of hypertrophy (1).

In the study, Schoenfeld proposed that there are 3 primary mechanisms for increasing muscle hypertrophy including:

However, more recent research seems to suggest that mechanical tension is the primary driver of muscle hypertrophy, while muscle damage and metabolic stress are indirect side effects.

Some researchers have suggested that muscle damage contributes to muscle growth because the training methods that produce the most hypertrophy such as eccentric training also cause more muscle damage. Also, when muscles are damaged after strength training, this triggers a large increase in muscle protein synthesis and an increase in satellite cell activation.

However, some researchers believe that muscle damage does not contribute to muscle growth and is just an unnecessary side-effect of strength training, rather than a contributing factor.

This argument is based on the following evidence:

As you can see, there is a high likelihood that muscle damage does not directly contribute to hypertrophy given the emerging evidence. In fact, excess muscle damage might actually be counterproductive if you end using up all your resources to repair damaged tissue rather than synthesising new tissue.

Therefore, muscle damage is not something you should seek out on purpose. This is where lots of people make the mistake of trying to kill themselves in the gym every workout, and if they are not sore, they feel as though they did not have a good workout. Muscle soreness is not an indicator of a good workout. In fact, it may be best to start out with a lower workload and build up gradually, in order to keep muscle damage in check. The only indicator of a good workout is load or rep progression.

However, acidosis and metabolite accumulation are not necessary to increase motor unit recruitment. Motor unit recruitment increases when there is a need to produce a greater effort (8). Whether that effort is needed to lift a heavier load, or to lift the same load under fatigue, the underlying mechanism that causes fatigue is irrelevant.

Also, the role of post-exercise systemic hormone release has recently come into question, with some researchers speculating that the purpose of post-exercise hormonal elevations is to mobilize fuel stores rather than to promote tissue anabolism (9). In fact, studies have shown that longer rest periods are more effective for increasing hypertrophy, even though shorter rest periods are associated with greater systemic hormone release (10,11).

Now that we have made an argument for why muscle damage and metabolic stress don’t contribute to hypertrophy, that leaves us with mechanical tension. Mechanical tension is detected by mechanoreceptors which triggers the signalling cascade that leads to muscular hypertrophy. The mechanically induced conformational change of individual muscle fibers may directly activate downstream signalling and may trigger messenger systems to activate signalling indirectly (16).

It is important to note that mechanical tension doesn’t necessarily mean you need to lift heavy loads. There are several factors that affect the level of mechanical tension that is experienced by a muscle fiber which we will discuss in more detail in part 2 of this blog.

To learn how to create results producing program design for clients from all walks of life to maximize results with fat loss, hypertrophy and body composition, click here to register for the Performance PT Coach Certification Level 1 online course!