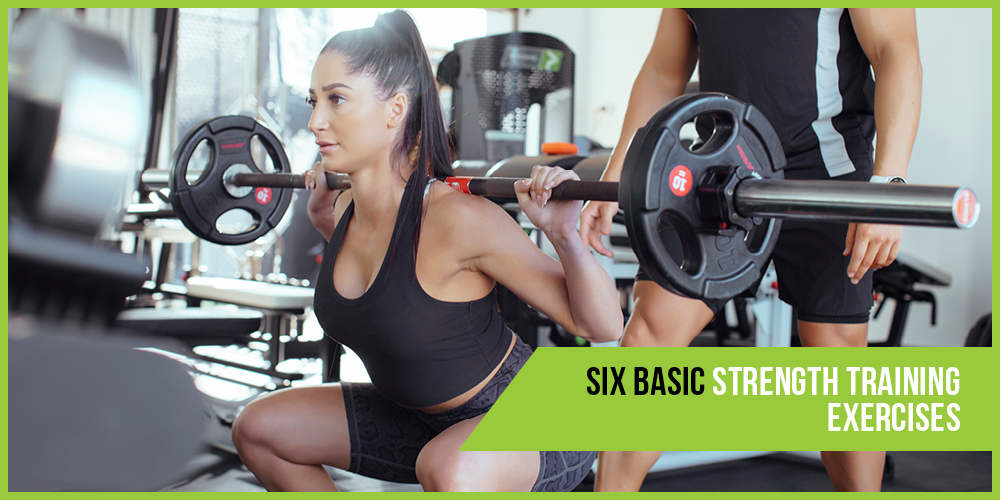 When we think about exercise selection in strength training, we often think of exercises in terms of the primary muscle groups that they target.

A sound and well-balanced strength training workout should target all the major muscle groups of the body.

Although looking at which muscle group(s) an exercise targets is important, at an even more basic level, we should be focusing on all the basic movement patterns.

The six basic movement patterns cover all the major muscle groups of the body, and they should form the foundation of any strength training program. Their prime movers are summarized below.

For each movement pattern, there are multiple variations, which will depend on the lifter’s goals, experience level, and lever lengths. For example, beginners or lifters with longer levers may benefit more from unilateral variations such as split squats or dumbbell work for the upper body.

For a beginner, a basic strength training workout should cover six basic movement patterns for 3-4 sets of 8-12 reps. Training the full body on three non-consecutive days per week should suffice. They can also throw in 2-3 sets of calves and abs at the end.

Intermediate and advanced lifters would benefit from splitting up the body over 2-4 sessions, for a total of 4-6 sessions per week. This way they can increase the volume of work for each of the main movement patterns, possibly adding another variation for each pattern and more isolated muscle groups.

For example, an intermediate lifter might perform a squat pattern and a hip hinge pattern on lower body days, followed by some unilateral and isolation work such as step-ups, lunges, and leg curls. They can then finish off with some calves and abs.

Advanced lifters may even choose to split up the upper body over two sessions and focus on the horizontal plane in one workout and the vertical plane in the second workout, by doing two exercises for each movement pattern, followed by isolation work for the delts, and arms.

Advanced lifters may also choose to split up their lower body days. Hence, they can focus on the squat pattern in one workout, performing multiple variations of the squat, and then, focus on the hip hinge pattern in the second workout through different hip hinge variations such as a deadlift from the floor and a deadlift from the pins. This may work better for advanced lifters because they need more volume per muscle group to stimulate progress.

Regardless, you can see that by structuring your workout plan around the six basic lifts, you ensure you are targeting all the major muscle groups of the body, adding extra isolation work where needed to provide more direct work for your weak points and/or priority areas.