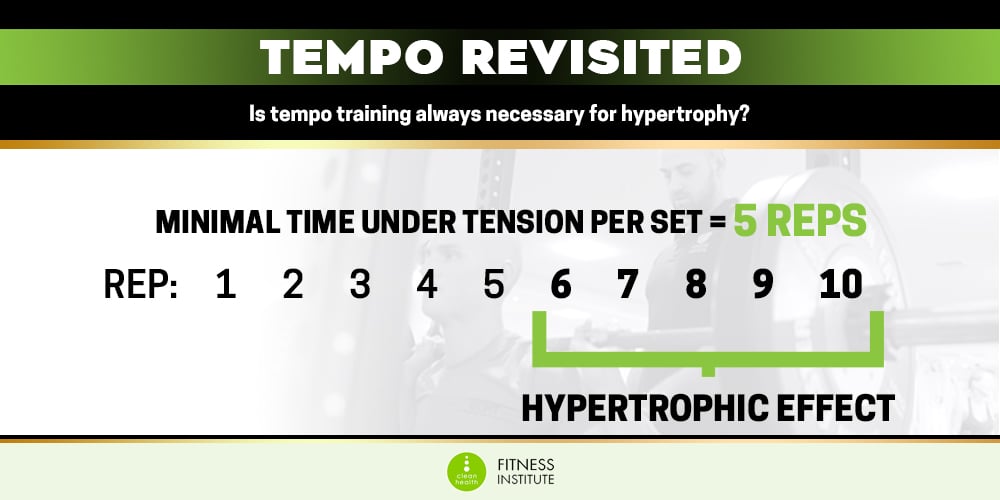 Over the years my stance on many areas relating to training and nutrition has changed and evolved as new and better research become available and I gained more in the trenches experience in the gym.

One of those areas in particular is tempo or repetition velocity. When most lifters start out, tempo is not something they really pay too much attention to. Most lifters will either try to lift the weight as fast as they can in an attempt to move as much weight as possible, or they will just lift in a controlled self-selected manner. I was no different in that regard.

However, as the years went by, and I became more educated, I learned about how you can manipulate tempo by assigning a digit to each phase of the repetition cycle, as a means of increasing time under tension, and injecting more variety into the training stimulus.

This concept was largely popularized by the late Charles Poliquin who was one of my mentors at the time. Charles contended that the time under tension per set was one of the most important variables for eliciting the right training response. He believed that to stimulate maximal hypertrophy, a muscle needed to be under tension for 40-70 seconds per set.

This was largely based on the fact that bodybuilders who typically train with higher repetition ranges are significantly more muscular then strength athletes, and higher reps with shorter rest periods have been shown to elicit a greater anabolic hormone release.

However, there are several problems with the above assumptions…

Firstly, recent studies have shown that neither the time under tension per set nor the acute hormone response to a workout are well correlated with chronic increases in hypertrophy.

In recent years, several researchers have questioned the validity of the hormone hypothesis, with some speculating that the purpose of post-exercise hormonal elevations is to mobilize fuel stores rather than promote tissue anabolism (1). Recent studies have also shown that hypertrophy is similar on a per set basis when using anywhere from 6 to 25 reps per set, if sets are taken close to failure (2). However, it appears that for sets of 5 reps or less, more total sets need to be performed to achieve the same hypertrophic effect (3,4).

Therefore, a minimal time under tension per set may be required in order to trigger maximal hypertrophy, which appears to be around 5 reps. This suggests that the hypertrophic effect of any set likely comes from those last 5 or so reps before failure, irrespective of the load or total reps. This makes sense given that in those last 5 reps before failure, the high threshold motor units, which have the greatest potential to hypertrophy, are recruited and subjected to high time under tension.

When we are using submaximal loads (less than 5RM), those earlier reps simply act to bring us to a point of fatigue for those last few growth producing reps. Whether we use a slow or a fast tempo to get to that point doesn’t really matter. By the last 5 or so reps the bar is going to be moving slow on the concentric phase even if we are applying maximal intent, so the high threshold fibers will be subjected to high time under tension regardless.

By deliberately slowing down the eccentric phase of a normal lift, that would at best extend the time under tension on the low threshold motor units, not the high threshold motor units, which have the greatest potential for hypertrophy. That is why most studies do not show any benefit from slowing down the eccentric or concentric phase of a lift (6). In fact, training at very slow volitional durations appears to produce inferior increases in muscle growth (6). This is likely because deliberately training at a very slow cadence does not stimulate the highest-threshold motor units.

Therefore, our recommendation in regards to tempo is simply to slow down as much as you need in order to control the weight but no more. Some coaches still like to assign digits to the tempo in order to inject some variety into their programs, and to more accurately track their client’s progression. That is fine, as long as counting digits does not take away from the quality of the overall training stimulus. For many people, counting tempo instead of focusing on the muscles they are working can become very distracting, so assigning digits to the tempo doesn’t work well for everyone.

To learn how to create world leading training programs with clients and athletes for hypertrophy, click here to enrol into the Performance PT Coach Certification Level 1 online course!