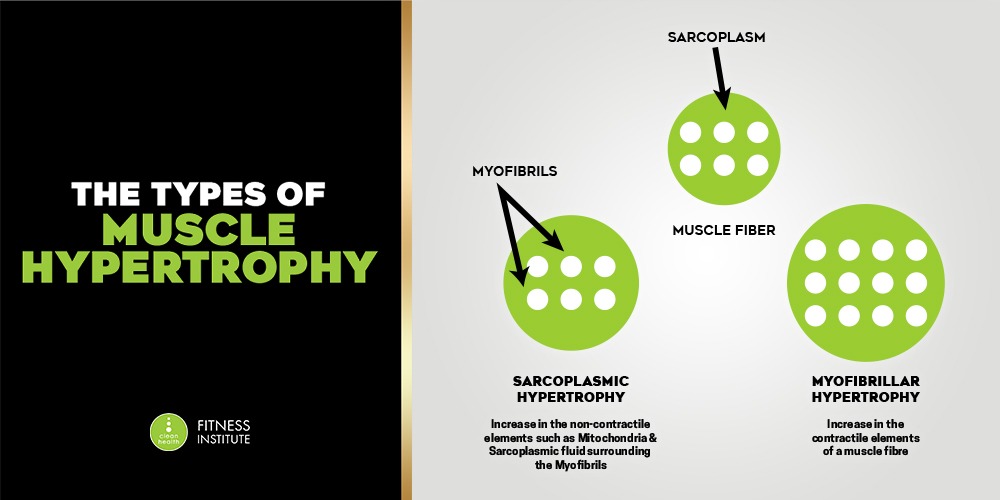 There is limited evidence in humans to suggest that hyperplasia occurs in humans, and if it does occur, it probably accounts for less than 5% of the total increase in muscle size (1). For that reason, we are going to focus on the different types of hypertrophy here.

There are two primary types of hypertrophy including:

Myofibrillar hypertrophy refers to the increase in the contractile elements of a muscle fiber, while sarcoplasmic hypertrophy refers to the increase in non-contractile elements such as mitochondria and the sarcoplasmic fluid surrounding the myofibrils. The sarcoplasm is a water solution containing ATP and phosphagens, as well as the enzymes and intermediate product molecules involved in many metabolic reactions. Similar to the cytoplasm in other cells, the sarcoplasm is critical for maintaining ion and pH balance within muscle fibers (2).

This claim is often accompanied by a reference to “The Science and Practice of Strength Training” by Zatsiorsky and Kraemer, which is regarded as one of the top books on the topic of strength training, by two industry giants (3).

However, the evidence-based community has largely rejected this claim for many years now because there has been limited evidence to suggest that one type of hypertrophy occurs in the absence of the other. That is to say, the myofibrils and sarcoplasm will typically increase in proportion when hypertrophy takes place. Typically, the myofibrils make up about 85% of muscle volume, while the sarcoplasm makes up about 15%, and that ratio tends to remain fairly constant when muscle size increases (2).

A few recent studies have suggested that disproportionate sarcoplasmic hypertrophy may indeed occur in response to high volume training, however, at this point in time it is still not clear if that is a transitory response from localized edema (2). In addition, if disproportionate sarcoplasmic does indeed occur, it likely does only in well trained individuals that reached a myofibrillar protein accretion threshold (2).

What about fiber specific hypertrophy?

Some authors have suggested that high-load and low-load resistance training may cause specific fiber type adaptations. The theory behind this hypothesis is that high loads may be needed to fully stimulate the high threshold motor units associated with type IIx fibers, while with low-load training, the lower threshold motor units will be under load for a longer period, which in turn, might increase the hypertrophic response of type I muscle fibers.

While some evidence indicates that low-load resistance training, when performed to muscle failure, may induce a greater hypertrophic response in type I muscle fibers and that high-load resistance training may induce preferential growth of type II muscle fibers, the body of literature remains equivocal on this topic as the majority of studies do not support this hypothesis (4).

It is likely that in any set approaching failure, in those last few reps all the motor units are being recruited and fatigued, irrespective of the load. This is why most studies show similar hypertrophy between high and low load resistance training when sets are in close proximity to failure (4).

Therefore, as with sarcoplasmic and myofibrillar hypertrophy, you probably don’t need to worry too much about training for fiber specific hypertrophy. Variation in rep ranges is more important for preventing boredom than anything else, which can lead to central fatigue, since central nervous system drive is largely influenced by your level of motivation. Diminished central drive will lead to an impaired ability to recruit the high threshold motor units which have the greatest growth potential.

However, there is research to support that certain types of muscle contractions can lead to the addition of sarcomeres either in series or parallel. Sarcomeres are the basic contractile units of myofibrils.

For that reason, different modes of contraction, and exercises targeting different points of the strength curve should be used for each muscle group, in order maximize hypertrophy in the different regions of the muscle.

To learn how to create results producing program design for clients from all walks of life to maximize results with fat loss, hypertrophy, body composition and more, click here to enrol into the Performance PT Coach Certification Level 1 online course!

Find awesome listings near you!