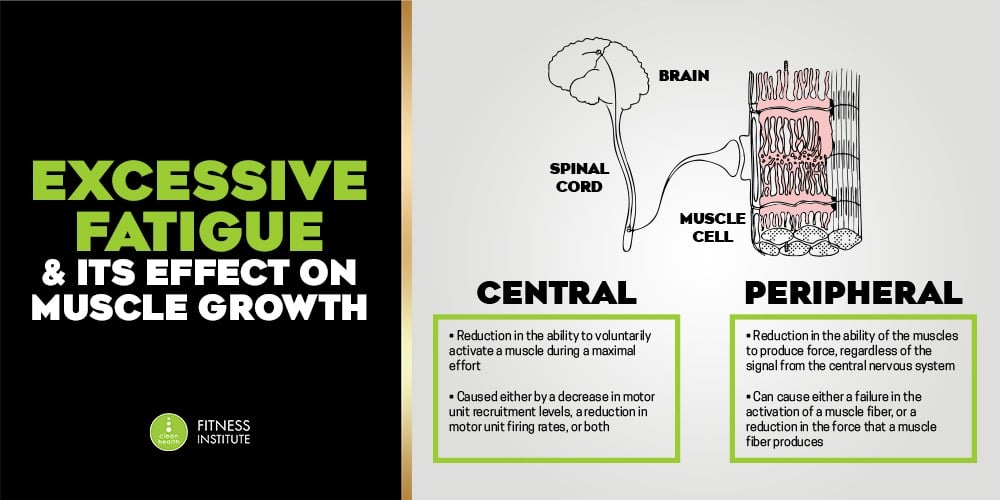 That means we need to find a balance between delivering sufficient mechanical loading to the muscle fibers to stimulate hypertrophy while avoiding excessive muscle damage and metabolite accumulation.

In this blog, we are going to explore in a little bit more detail how muscle damage and metabolic stress can impede hypertrophy.

Peripheral Fatigue
Peripheral fatigue refers to a reduction in the ability of the muscles to produce force, regardless of the signal from the central nervous system.

Peripheral fatigue involves 3 processes that occur at the neuromuscular junction including:

If we are unable to effectively recruit the high-threshold motor units due to central fatigue, we will not be able to impose a mechanical loading stimulus on those fibers and stimulate them to hypertrophy. This means that less muscle growth will be stimulated.

That is why higher repetitions have been shown to induce greater central fatigue than lower repetitions, contrary to popular belief (5). In addition, shorter rest periods, which are also associated with the accumulation of metabolites, an increased inflammatory response, and an increased cardiovascular demand, have been shown to blunt the anabolic response to resistance training (6,7).

This suggests that we should not be chasing metabolic stress when training to maximize muscle growth, especially early on in a workout, as that could increase central fatigue and impair recruitment of the high threshold motor units. That means training methods aimed at maximizing the ‘pump’ may not be ideal for hypertrophy.

Following a workout, when considered in isolation, the dissipation of peripheral and central fatigue is very rapid after the bout, with the effects lasting less than an hour. However, when muscle damage is present, this changes. Workouts that cause a lot of muscle damage have been associated with central fatigue which persists for much longer than would normally be expected (8).

Several studies have shown that when subsequent muscle damaging workouts are done within several days of the initial workout, muscle damage is not exacerbated, and recovery is not negatively affected (9-11). Some have interpreted this to mean that a higher training frequency may be better for hypertrophy, since the time course for elevated muscle protein synthesis only persists for about 36 hours following a resistance training bout (12).

However, studies have shown that when multiple muscle-damaging workouts are done over a period of several weeks, with insufficient recovery between workouts, minimal hypertrophy occurs (13). This suggests that subsequent workouts are not stimulating hypertrophy, when full recovery has not taken place, indicating that central fatigue may be preventing full motor unit recruitment.

It appears that this central fatigue might be caused by a post-workout inflammatory response involving certain cytokines that enter the brain, which are known to influence fatigue (14,15). In addition, muscle damage can lead to oxidative stress which interferes with the elevation in muscle protein synthesis triggered by mechanical loading (16).

A better strategy would be attempting to minimize muscle damage, while still delivering sufficient mechanical loading to the muscles, which would allow you to increase training frequency. Provided a sufficient mechanical loading stimulus has been imposed, and full recovery has taken place before the next session, theoretically, a higher training frequency would yield faster progress.

To learn how to design evidence based training programs safely and effectively, to help you maximize client results with a trialed and tested system that actually works, click here to register for the pre-sale of the Performance PT Coach Certification Level 1 online course!