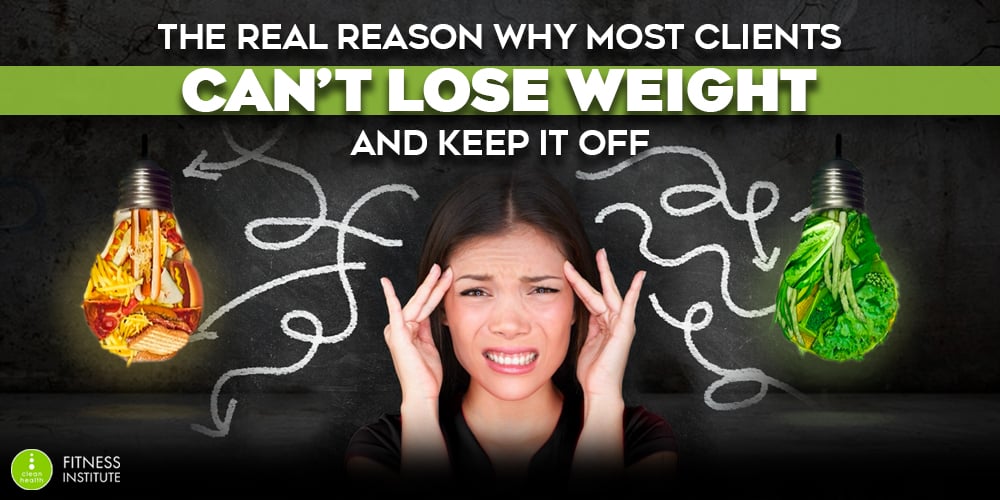 So why is it that losing weight and keeping it off is so difficult?
Most people believe it has something to do with their slow metabolism, their lack of willpower, or perhaps they blame the diet because it wasn’t sustainable. While all those things might be partly responsible, the real reason is something rooted a lot deeper than that.

The real reason has everything to do with your IDENTITY…
If your client identifies as being an overweight person, all of their thoughts, feelings, habits, and behaviours will be congruent with that. The need to stay congruent with their identity, as this is the strongest driver of human behaviour.
Let that sink in for a moment…

Now, why you might understand and be able to intellectualize this, doing something about it is a lot more difficult. In fact, changing identity is just about one of the hardest things to do, but not impossible.

There are two main tools that you can utilize:
1. Setting a true goal
2. Meditation/Visualization

Setting a True Goal
Lots of people talk about goal setting, very few people do it in a way that is actually effective. When most people set goals, they come from a place of right now is not good enough, and they need to fix it. A prime example of this is when you think to yourself, “I am overweight, and I need to go on a diet”. That though process of not being good enough now and needing to fix yourself is exactly what keeps you stuck in that old identify, the identity of not being good enough and needing to fix yourself.

If a goal has a conditioned attached to it, such as needing to fix yourself, or needing to lose weight in order to feel a certain way, then it is not a true goal. A true goal is when you want something simply because you would love to have it. So, your pursuit becomes about creating that which you desire and letting go of the old identity and the need to fix yourself.

It is also important to not just set one goal, but set a goal after the goal, because if the brain doesn’t know what is coming next, your client will subconsciously sabotage themselves so that they have something to chase.

Meditation/Visualization
Equally important if not more important than setting a true goal, is getting into the end emotion of achieving your goal before you actually achieve it. In other words, you have to be it, before you see it.

That doesn’t mean fake it until you make, but that your client’s thoughts, actions, habits, and behaviors need to be congruent with the person your client is trying to become. Since thoughts lead to actions, and you can’t think greater than how you feel, it is very important that they condition their brain to experience the end emotion ahead of the event. That way, new emotions will lead to new thoughts, new thoughts will lead to new actions and behaviors, which will ultimately lead to the desired results.

This phenomena of rewiring the brain is called neuroplasticity. Neuroplasticity is the change in neural pathways and synapses that occurs due to certain factors, like behavior, environment, or neural processes. During such changes, the brain prunes apart old neural connections that are no longer necessary or useful, and forms and strengthening new synaptic connections.

This is where meditation and visualization come into play. If your client has spent years thinking and feeling a certain way, those thoughts and emotions have become a conditioned response. They are going to need to spend some time each day shutting their eyes, disconnecting from their current reality, and visualizing themselves achieving their end goal and experiencing those emotions.

Want to become an industry leading coach and specialize in training, programming, nutrition & business to help others achieve their health and fitness goals? Become a qualified personal trainer and enrol into the Master Coach Program!
CLICK HERE FOR MORE INFORMATION & TO SPEAK WITH OUR CAREERS ADVISOR!