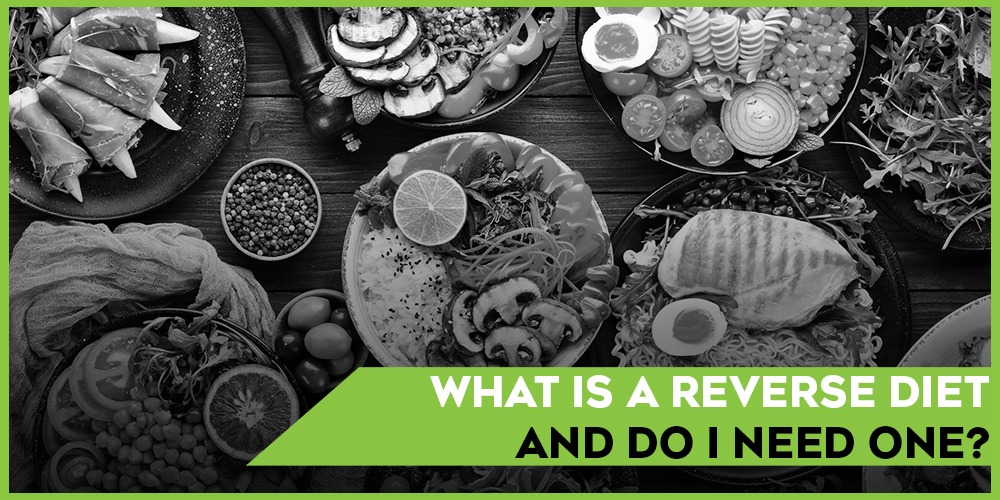 What is a Reverse Diet and Do I Need One?

The reverse diet is a hot topic these days, and for good reason!

With so many people going on crazy 8-week challenges and jumping from one diet to another, most end up gaining back all the weight they lost and often more. Many hit a plateau before they even reach their goal and end up getting stuck on 1100-1400 calories with nowhere to go.

This is where the reverse diet comes into play and it can be a very useful tool if used properly.

For example, many people with a history of chronic dieting struggle to maintain their weight at a caloric intake well below their predicted maintenance level. With repeated bouts of yoyo dieting their metabolism has adapted to a much lower set point.

When you are operating at a lower setpoint, it becomes much harder to lose weight and much easier to put on weight. In fact, some studies have shown that resting metabolic rate can decline by almost 50% from 6 months of extreme dieting, and that adaptation can persist for over 13 weeks, even after all the weight has been gained back [2].

Other studies in very overweight individuals have shown that the metabolic adaptations in response to very severe caloric restriction can persist for years after they had gained all the weight back or more [3].

In reality, reverse dieting can be a long and tedious endeavour and is often much harder to adhere to than the diet itself. That’s because it’s easy to be motivated when you have your eyes on the prize and you need to buckle down hard only for a short period.

But once a person reaches their goal and that carrot is no longer dangling in-front of them, and they are tired, hungry and miserable, its very easy to slip back into old eating habits and gain all the weight back because they never developed sensible and sustainable eating habits in the first place.

So, what exactly is reverse dieting and how does it work?

Reverse dieting basically involves a slow and gradual increase in calories so as not to overwhelm your impaired metabolic capacity and gain back a lot of weight.

When the body experiences a slow and gradual increase in calories over time it gives the metabolism a chance to adapt to the increased caloric intake. In fact, for most people it takes longer for the metabolism to adapt upwards unless they have a very inefficient metabolism.

Typically, the longer someone has been in a deficit and the more aggressive the deficit, the more conservative they need to be when reverse dieting. I generally don’t like to increase more than 10% of total calories at a time. Also, I prefer increasing calories every 2 weeks instead of weekly, because it gives the metabolism a bit of extra time to adapt to the increased caloric intake.

If someone is not gaining body fat at above their predicted maintenance, that usually corresponds to a transient increase in metabolic rate from acute overfeeding. Most of it is just excess energy being dissipated as heat. It has no long-term effect on increasing their metabolic set point.

If someone wants to gain weight, then I may push their calories higher. If they just want to reset their metabolic set-point then you don’t need to go much above their predicted maintenance. Maybe around 5% or so to account for prediction error.

Once you are ay your predicted maintenance, ideally you want to stay there for a couple of weeks at least, for the metabolic reset to take place. Unfortunately, there are some people, usually those with a history of chronic dieting where a couple of weeks at maintenance may not be enough to prevent them from having to diet on very low calories in the future.

That’s may have something to do with activating the body’s “self-defence system” in response to repeated bouts of dieting, which can make you more resistant to weight loss in the future. That’s why I mentioned earlier that reverse dieting is not a get out of jail free card.

Reverse dieting is a useful exit strategy for combating the metabolic adaptations in response to dieting and preventing unwanted weight regain. However, the more calories you can effectively diet on, and the more sustainable dietary habits you are able to develop in the process, the less likely you are to experience severe and prolonged metabolic adaptations, and the more likely you are to maintain the weight lost.