How to Use Food to Optimise Microbiome Health 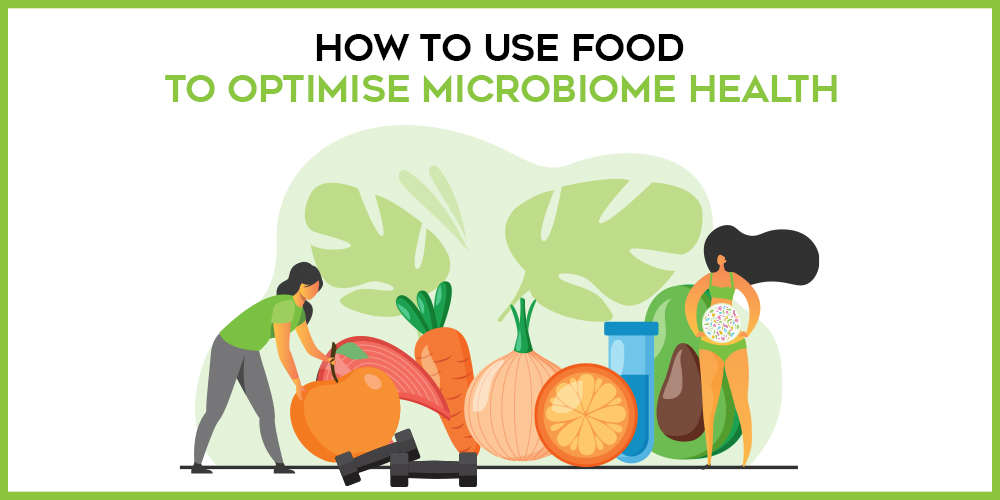 Our gut microbiome is made up of trillions of bacteria and other microorganisms that reside in the lower intestine and colon. The microbiota plays a huge role in our health and serves many important purposes such as strengthening gut integrity and shaping the intestinal epithelium, digesting fibre, regulating energy metabolism, protecting against pathogens, regulating immune function, and brain health (1-6).

There are thousands of different types of bacteria in our intestines, most of which are beneficial to our health. However, when there is an overgrowth of pathogenic or harmful bacteria, yeasts and/or parasites, and too few beneficial bacteria, called dysbiosis, it can adversely impact our health and body composition. Dysbiosis has been linked to obesity, inflammation, insulin resistance, inflammatory bowel disease, IBS, allergies, asthma, cardiovascular disease, and mental health issues (7-12).

Several well-known studies have shown that the gut microbiome differed completely between lean and obese identical twins, suggesting that differences in the microbiome were not genetic (13,14). Several factors such as antibiotics, psychological and physical stress, certain dietary components including sulphates, animal proteins, simple sugars and refined carbohydrates, and artificial sweeteners have been found to contribute to intestinal dysbiosis (15-17).

The primary symptoms associated with dysbiosis include diarrhea, abdominal pain, and bloating (18). Small Intestinal Bacterial Overgrowth (SIBO) is a form of gut dysbiosis where there is an increase in the number and/or an alteration in the type of bacteria residing in the small intestine. Non-invasive hydrogen and methane breath tests are most commonly used by medical practitioners for the diagnosis of SIBO (19).

Treatment for dysbiosis and SIBO generally involves antibiotics, such as ciprofloxacin (Cipro), metronidazole (Flagyl) or rifaximin (Xifaxan). Antibiotics decrease the number of bacteria in the intestine, but they also wipe out the good bacteria which can adversely impact our health, and they don’t do anything to address the underlying issue that caused the problem in the first place.

Studies have shown that in nearly 50 percent of patients treated for SIBO with antibiotics, the SIBO will relapse within 9 months (20). Old age and chronic use of PPI medication were both significantly correlated with recurrence.

Some alternative health care practitioners recommend a low fibre and low FODMAP diet while undergoing antibiotic or antimicrobial treatment for SIBO. FODMAP is an acronym for fermentable oligosaccharides, disaccharides, monosaccharides, and polyols. Since bacteria feed on these prebiotic foods, the reason for cutting them out is to starve off the excess bacteria.

This practice is not currently supported by the literature and may even be harmful. Several studies have shown that a low FODMAP or low fibre diet can lead to a reduction in beneficial bacteria and an increase in mucus-degrading bacteria, which enhances pathogen susceptibility (26-28).

There are other foods which have also been shown to improve the gut microbe composition including:

Additionally, breastfeeding is especially important for the development of the gut microbiome and is associated with lower rates of allergies, obesity and other diseases that may be due to differences in the gut microbiota (41,42).

Furthermore, a newborns’ consumption of fibre and oligosaccharides is directly linked to the mother’s diet, and the current dietary recommendations for pregnant mothers around the globe fall short in addressing the importance of dietary fibre intake for enhancing mother’s health and establishing the developing infant microbiome (43).

Exercise has also been shown to have a beneficial effect on the gut microbiota, and thus this could be another factor by which exercise promotes well-being, since gut microbiota appears to be closely related to health and disease (44).

Hopefully, now you can appreciate the importance of the of having a diverse and healthy gut microbiome, and why it is important to consume a high fibre, nutrient dense, and diversified diet.