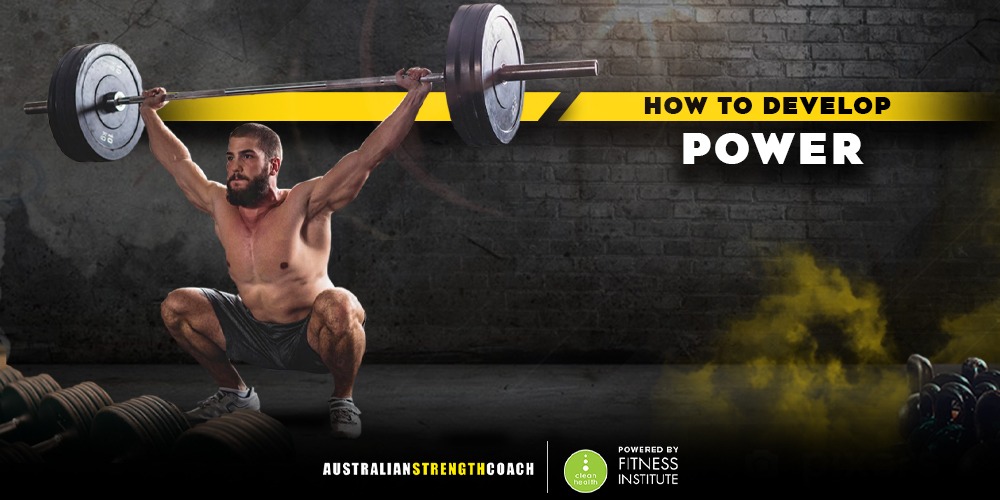 How to Develop Power- Part 1

Power is the motor quality that separates the great athletes from everyone else in most sports.

World renowned strength coach, Charles Poliquin, who had perhaps the greatest track record of any strength coach in history used to have a saying that in most sports, “The money is made from 0 to 5 meters”.

Power refers to the ability to generate maximal force in minimal time, or rate of force development. Most athletic movements such as running, jumping, hitting, and throwing are reliant on generating maximal power.

Since power is defined as force x velocity, both components need to be trained to maximize power development. Force refers to the ability to overcome resistance which is dependent on maximal strength. Developing maximal strength requires the use of heavy loads.

There are two types of maximal strength:

However, even in that instance, too much muscle hypertrophy can increase the pennation of the muscle fibres which can slow down contractile force. Therefore, we want to limit hypertrophy when aiming to maximize power development and focus on increasing relative strength.

Typically, an athlete should initially focus on increasing their relative strength before focusing on rate of force development. If an athlete is weak and they can’t produce a lot of force to begin with, there is little use training rate of force development. Additionally, increasing an athletes’ strength base helps condition and prepare their connective tissue to withstand the higher forces associated with power training.

Once an athlete has developed sufficient strength, typically when they are able to squat 1.5 to 2 times their body weight, then it is time to shift the focus to increasing the rate of force development. Beyond a certain threshold, increasing maximal strength further will yield only limited improvements in power relative to the effort invested. Remember, most athletes only have limited time to devote to strength training because of all the tactical work they have to do on top of that.

Rate of force development is dependent on 3 factors:

This is illustrated in the graph below.

Bear in mind this refers to traditional lifts such as squats, bench presses and deadlifts. When using Olympic lifts, the load can be increased to 70-90% of your 1RM, since by their very nature, Olympic lifts are performed explosively, even when using near maximum loads. For example, a maximum power snatch, is typically around 65% of an athletes’ maximum squat.

Reactive strength on the other hand refers to the ability to utilize the stretch-shorting cycle and switch rapidly from an eccentric to a concentric contraction. When you rapidly transition from an eccentric to concentric movement elastic energy is stored in the muscles and tendons which then subsequently allows for a stronger muscle contraction. Reactive strength is best developed using plyometric exercises which make use of the stretch shortening cycle.

Now that we have covered the groundwork in part 1 of this article. In part 2 we are going to look at some practical applications of what we discussed, stay tuned for part 2!

Want to learn the principles of building base strength and how you can set that base up to convert into hypertrophy, power or performance goals ongoing for yourself and athletes? Enrol into Sebastian Oreb’s Strength System International Certification Level 1 course which is live NOW!