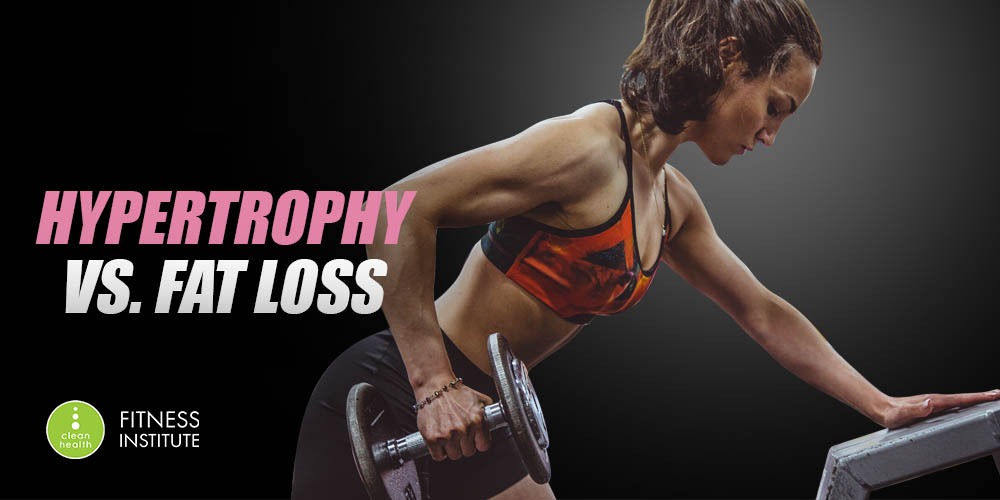 When it comes to resistance training for fat loss there are typically 3 schools of thought.

The first school of thought dates back to the golden era of bodybuilding where Arnold and his peers would increase the volume and frequency of their training in the months before a competition.

Because at that time they didn’t do a lot of cardio, the extra volume of weight training helped them burn more calories and boost their metabolism. They also believed that doing more exercises and hitting the muscles from different angles, as well as adding posing to their routine would help improve their shape and conditioning.

The third school of thought believes that during a cutting phase you should reduce the volume of weight training, because your recovery is compromised during caloric restriction, and increase the volume of cardio training instead.

So which method is best?

Well for starters its worth mentioning that all 3 methods have produced great physiques, so they all work to some degree.

The method that is best suited to you may depend on several factors such as:

Typically, what I have found works best for majority of people, provided they are only using a moderate energy deficit is the following guidelines:

Since muscle protein synthesis is impaired and muscle protein breakdown is increased during caloric restriction, you want to avoid excess muscle damage. This means not taking too may of your sets to failure and avoiding too many shock techniques. Although it may seem cool, this is not the time to go ape shit on heavy lifting, drop sets, forced reps, eccentric reps, loaded stretching, and the like.

Limit muscle failure to 1-2 sets per exercise and avoid performing too many sets in the lower rep ranges. This will prevent excessive muscle breakdown and keep your nervous system fresh, which helps in terms of keeping your energy and NEAT levels up throughout the day. It also gives your joints a break from all the heavy lifting.

For example, in a muscle building phase I tend do the majority of my sets in the 6-10 rep range, which is where I get my best growth. However, in a fat loss phase I tend to burn out and my joint get beat up if I do too many heavy sets and I do best if I only hit a couple of heavy sets on my first exercise to maintain my strength, then work moderate to light on the remaining exercises.

If you are not going super heavy and not taking too many of your sets to failure, it is entirely feasible for most people to increase their overall training volume during a cutting phase. This is because as you go on a diet, mitochondrial and capillary density will increase, and your work capacity will go up.

In other words, you will be able to handle more volume in terms of metabolic stress and still be able to recover just fine. This has the benefit of increasing metabolic rate, burning more energy, allowing you to consume more calories, and reducing the amount of cardio you need to do.

Since the body will become more and more efficient over time, build up your volume gradually as you go along to account for the increased efficiency.

Reducing your rest periods between sets will naturally limit the loads you will use in your exercises. Density based methods such as supersets, trisets, 8×8, 6×12, 5×15 etc allow you to perform more work per unit of time using submaximal loads. This is great because as I mentioned previously you can perform more work overall while managing fatigue effectively.

It is worth mentioning that for some people, usually those who are chronically stressed, or have cut calories too aggressively, jacking up their volume too much, even when using submaximal loads, can drive them into a catabolic state.

That’s because their cortisol levels are already too elevated and increasing volume or intensity will jack them up even further. Usually these types which I call “train less, eat less” types, will do best keeping their overall volume low to moderate and increasing their energy expenditure through low intensity cardio and diet.

During a cutting phase is not the time to specialize on a body part. This is a time to focus on maintaining muscle and stripping away body fat. Too often I see, with females especially, people trying to bring up their weak body parts while trying to simultaneously strip away body fat.

The best time to focus on building up your weak body parts is during a hypertrophy phase when you have ample calories coming in and the body is systemically in an anabolic state. During this time, you can reduce the volume of your non-priority body parts, so you do not overtax your systemic recovery.

In a fat loss phase it is generally best to split your volume up more evenly across all your body parts to drive up energy expenditure and metabolism, and also split up your weekly volume for each muscle group over more session so that your muscles can recover easier from each session.

It is important not to start with too much too soon otherwise you will not have much room to progress.

Want to separate yourself from the pack and become equipped with advanced client assessment and programming methodologies to maximize results with all clients, from general population, physique athletes all the way up to Olympic medalists, in record time?
CLICK HERE to enrol into the Ultimate Education Bundle, which includes the Fundamentals of Program Design & Advanced Program Design online courses!