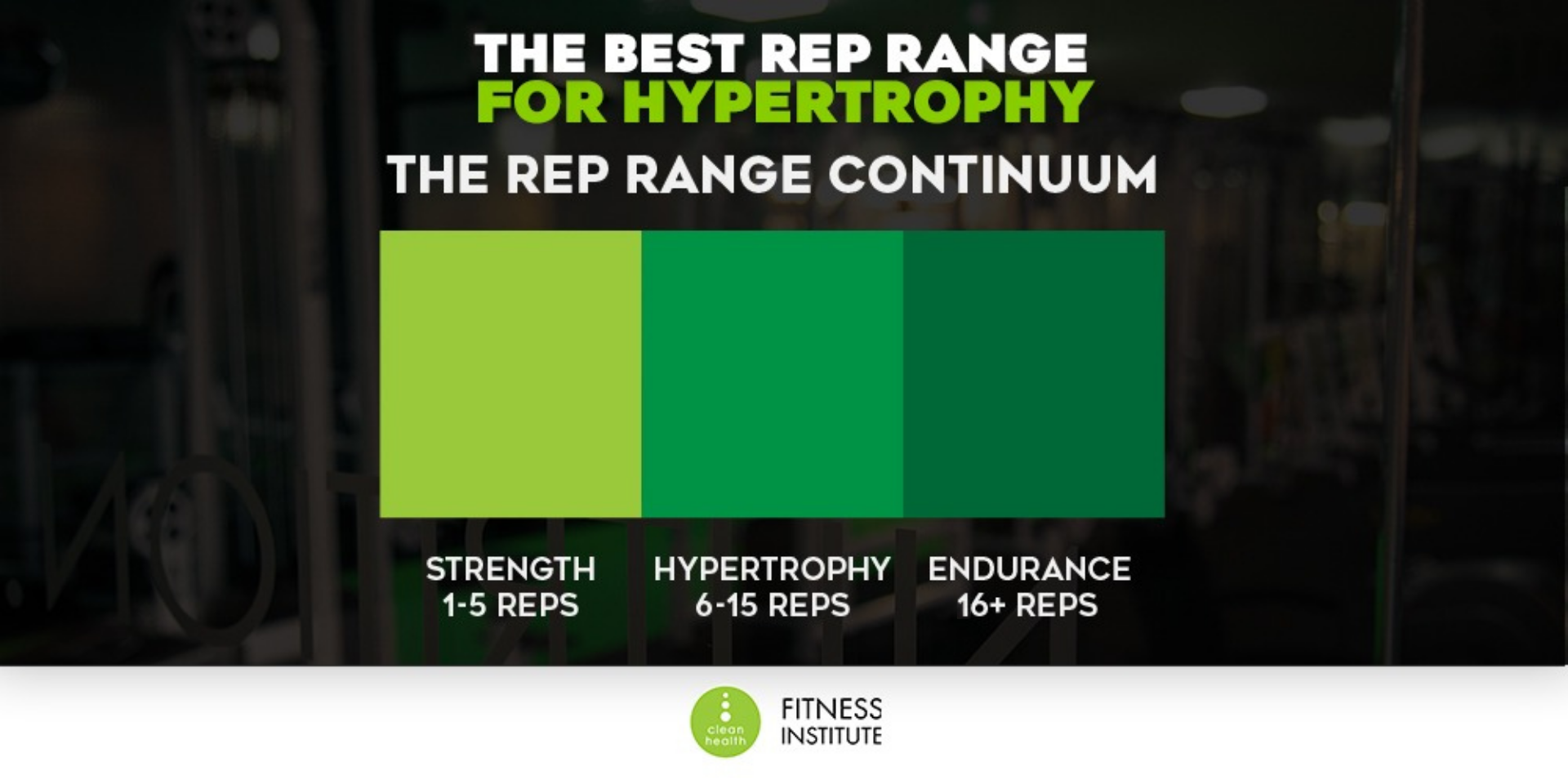 The Best Rep Range for Hypertrophy

From an anecdotal standpoint these recommendations seem to hold up quite well given that bodybuilders who display significantly greater hypertrophy than strength and endurance athletes, tend to train mostly with moderate reps.

More recently, researchers have discovered that similar hypertrophy can occur using anywhere from 6-25 repetitions per set, when training in close proximity to failure (1). However, it appears that for sets of 5 reps or less, more total sets need to be performed to achieve the same hypertrophic effect (1,2).

This suggests that most of the muscle growth that takes place in a given set occurs in the last 5 or reps before failure, irrespective of the rep range. Studies have shown that the last few reps of any given set approaching failure look quite similar in terms of the absolute velocity regardless of the load used (3). That means that whether using a heavy or a light load, as you approach failure, the high threshold motor units will be recruited, and because of the unintentionally slow shortening velocity, the mechanical tension on each fiber will be high.

The force-velocity relationship of a muscle fiber is determined by the number of actin-myosin cross bridges that are attached at any one time. When muscle fibers shorten slowly, they can form more simultaneous cross bridges, but when they shorten rapidly, they form fewer cross bridges at the same time.

For this reason, only those contractions in which the high-threshold motor units are being recruited, and the bar is moving slowly, will provide sufficient mechanical loading for those motor units which have the greatest potential for hypertrophy. That is precisely what occurs when we take any set to failure irrespective of the load, provided we are doing at least 5 reps per set to accumulate sufficient volume.

However, even if on a set to set basis the hypertrophic stimulus might be similar between lower or higher reps provided that you approach failure, contrary to what most people think, higher reps cause greater acute central fatigue (5). Acutely, it appears that central fatigue within a workout may be caused by metabolite accumulation, an inflammatory response, or a greater cardiovascular demand (6-8).

This means you will be able to perform fewer total quality sets when performing higher rep sets before central fatigue kicks in and impairs the recruitment of the high threshold motor units. If you are unable to recruit the high-threshold motor units, the hypertrophic stimulus will be suboptimal.

Why the 6-12 rep range is best for muscle hypertrophy

As a result, moderate rep ranges between 6-12 are likely optimal for increasing hypertrophy because they allow you to accumulate enough quality volume without accumulating excess metabolites and increasing central fatigue, which can be detrimental for hypertrophy.

What about using higher or lower repetition sets to hit different muscle fibers?

While some evidence indicates that low-load resistance training, when performed to muscle failure, may induce a greater hypertrophic response in type I muscle fibers and that high-load resistance training may induce preferential growth of type II muscle fibers, the body of literature remains equivocal on this topic as the majority of studies do not support this hypothesis (13).

It is likely that in any set approaching failure, in those last few reps all the motor units are being recruited and fatigued, irrespective of the load. That is why most studies show similar hypertrophy between high and low load resistance training when sets are in close proximity to failure (1).

It probably wont hurt to thrown in a few higher repetition sets at the end of a workout when some fatigue is already present, and it probably won’t hurt to do a couple of heavier sets at the beginning of a workout to primer the nervous system, but we recommend keeping the majority of sets in the 6-12 rep range when training for hypertrophy.

To learn how to produce program design for clients to maximize results for hypertrophy, click here.