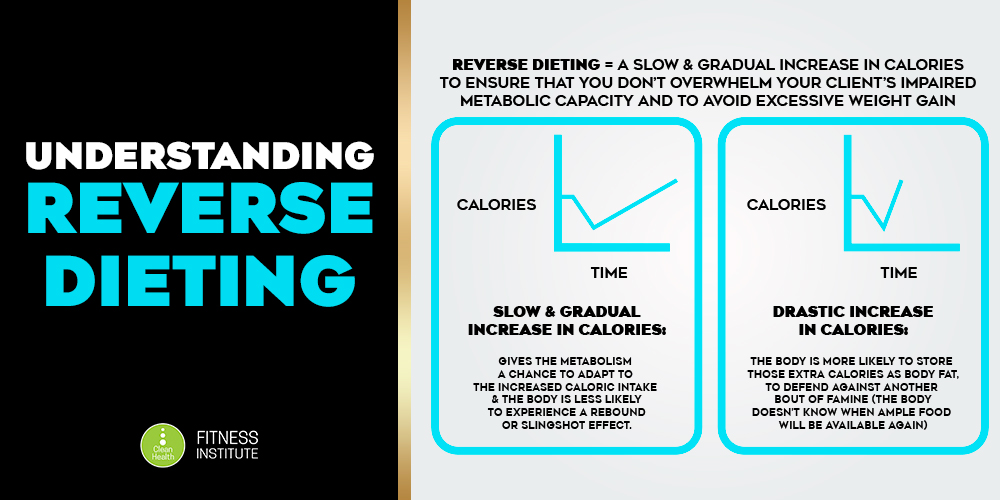 When should reverse diets be used?

Reverse dieting is a hot topic these days, and for the most part, this is not just another fad but an important topic that warrants all the hype.

With so many people going on crazy 8-week challenges and jumping from one diet to another, most end up gaining back all the weight they lost and sometimes even more. Others hit a plateau before they even reach their goal and end up getting stuck on 1100-1400 calories with nowhere to go.

This is where reverse dieting comes into play and it can be a very useful tool if used properly!

There is no doubt that caloric restriction causes metabolic compensation. The degree of compensation depends on the magnitude and duration of the deficit as well as a person’s metabolic type.

The longer and harder someone has dieted and the more efficient someone’s metabolism is, the greater the metabolic compensation will be (1). Metabolic efficiency is at least in part genetically inherited but may also be affected by a person’s diet history.

For example, many people with a history of chronic dieting struggle to maintain their weight at a caloric intake well below their predicted maintenance. With repeated bouts of ‘yoyo-dieting’, their metabolism has adapted to a much lower set point.

When you are operating at a lower setpoint, it becomes much harder to lose weight and much easier to put on weight. In fact, some studies have shown that resting metabolic rate can be reduced by almost 50% from 6 months of competition preparation, and that adaptation persisted for more than 13 weeks post-competition after the competitor had gained all the weight back. (2)

Other studies in very overweight individuals have shown that the metabolic adaptations in response to very severe caloric restriction can persist for years after they had gained all the weight back or sometimes even more. (3)

For that reason and before we proceed, I want to caution that reverse dieting is not a ‘get-out-of-jail-free-card’. Many people falsely believe that they can crash diet to their goal then they can just reverse diet their way out if it.

In reality, reverse dieting can be a long and tedious endeavour and is oftentimes much harder to adhere to than the diet itself. That’s because it’s easy to be motivated when you have your eyes on the prize and you need to buckle down hard only for a short period.

But once a person reaches their goal and that ‘carrot’ is no longer dangling in-front of them, and they are tired, hungry and miserable, its very easy to slip back into old eating habits and gain all the weight back because they never developed sensible and sustainable eating habits in the first place.

Even some of the most dedicated individuals that I’ve coached have struggled with reverse dieting after a long period of dieting.

Are you looking to learn trialled, tested and evidence-based nutrition and training methodologies to coach comp prep for both male and female physique athletes in bikini, fitness, physique, figure, and bodybuilding? Click here to enrol into Dr Layne Norton’s Training the Physique Athlete online course now & SAVE!